Is Drug Use in Amsterdam Just For Tourists? Apparently Not

Is there a severe drug crisis in Amsterdam? According to the data, it would seem so. Though many locals reject the idea that Amsterdam is a hotspot for drug use, the city has developed a drug problem resulting from the rest of the world accepting this melded image of drug use and Amsterdam. A combination of tourists who travel to the town to use drugs put together with legalized drug use within the city limits, coffee shops that sell cannabis products and psychedelics, and a few other factors have all come together to create a severe addiction crisis in the city.

What does the drug crisis in Amsterdam look like? What factors contribute to it? Why is it harmful to normalize and accept drug use? And what can be done to improve conditions in Amsterdam?

Drug use may seem normal in Amsterdam, but it shouldn't be. And that's because drug use in Amsterdam is dangerous. According to the data:

One study in The Lancet found that the Netherlands is also experiencing a severe (and growing) opioid addiction crisis. That crisis, in particular, may be to blame for the more than 100% increase in drug-related deaths since the early-2000s. Sadly, much of this crisis can be blamed on Amsterdam and the Netherlands’ more or less accepting attitude towards drugs. Because drug use was already normalized in the region, rising opioid use statistics were not initially seen as concerning.

Amsterdam Implements Harm Reduction as the Lesser of Two Evils

It’s pretty easy to see the flaw here. Amsterdam policymakers are essentially admitting defeat, suggesting that people in Amsterdam will use drugs no matter what, and it would be better to create coffee shops that sell cannabis and psychedelics and have drug use be more easily monitored and allegedly “safer” than to criminalize drug use.

While one could make an argument for not criminalizing drug use, taking that stance does not assume that drug use should be legal and accepted.

But what about educational efforts to teach Amsterdam residents and visitors why they would not want to use drugs? Why isn’t Amsterdam implementing sufficient preventive measures to show people why they would never want to use drugs in the first place? This would likely be much more effective. It would give locals and visitors accurate data on drugs, showing them the harmful effects of mind-altering substances and informing them on why saying no to drugs is a good idea.

Unfortunately, it would seem that Amsterdam’s legal and public health systems have taken more of a harm reduction approach than a prevention approach. This is arguably a defeatist strategy. Amsterdam would probably improve health outcomes and lower addiction statistics if they stopped normalizing drug use and instead tried to prevent drug use from happening and treat it when it did happen.

Why It’s Harmful to Normalize Drug Use

There is a stereotypical association where, when people think of Amsterdam, drug use is one of the first things that may come to mind. In reality, most people who live and work in Amsterdam do not partake in drugs. However, because of Amsterdam’s association with restriction-free drug use, it’s more difficult for people who do struggle with addiction to get help.

When drug use is seen as acceptable and routine, it becomes more difficult for people who struggle with drug addiction to get help. “Normalized” drug use gives people the idea that drug use is safe, which couldn’t be further from the truth. When an activity becomes socially and legally acceptable, it becomes more difficult to explain how that activity is hazardous and seriously harms people.

Those who struggle with addiction in Amsterdam need to know that help is available. Drug and alcohol rehab centers exist to help people get off drugs for life, and Narconon offers a workable program that helps recovering addicts triumph over addiction.

Innovated over half a century ago and unique in its approach, the Narconon program has helped thousands of people overcome addiction for life, people who were thought to be lost to society.

And there are Narconon programs all over the world. If you or someone you care about is struggling with addiction in Amsterdam, please contact Narconon today. Please don't wait until it is too late to get help.

What Are Amsterdam’s “Coffee Shops”?

Whether intentional or not, Amsterdam has earned itself international recognition for its lax drug use policy. In fact, the city has almost become synonymous with “A place to travel to for drugs and partying.” The locals are not happy about this. Could the “coffee shops” that started it all become a thing of the past? 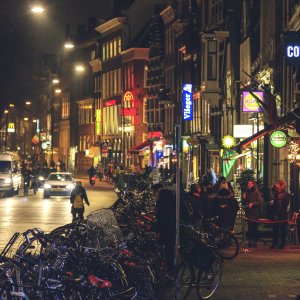