While the traditional image of the German people is that they are hard-working, law-abiding and maybe little serious, there is definitely another side to them. In major German cities, many people enjoy their nightlife. Berlin, Hamburg, Cologne, Saarbrücken, Dortmund and many other cities are all known for their lavish, over the top, anything-goes nightlife.

And where there is nightlife, there are drugs. Parties and nightclubs run on cannabis, alcohol and stimulants like cocaine, MDMA, amphetamine and methamphetamine. For a smaller group of partiers, there’s hypnotics like ketamine and newer synthetic drugs.

Large groups of people now come from other parts of the world to participate in these drug-fueled experiences. As to how many people and what quantity of drugs, we have an objective way to measure these quantities. At the end of the day, the evidence of this self-indulgence ends up in the wastewater flowing through German sewers.

The European Centre on Drugs and Drug Addiction (EMCDDA) routinely monitors residues of these drugs in the wastewater of many European cities to gain this objective look at how heavily the population is indulging. No matter what a person might tell a surveyor, wastewater will reveal the truth. Some German cities have remarkably high levels of drug traces in their wastewater.

The Results of Germany’s Wastewater Tests

The cities that topped the list for traces of these drugs included:

When the quantity of drug residues was compared to the population in each area, researchers could calculate how much of the drug had to be consumed to produce the residues they measured. In Erfurt, consumption had to average over 211 milligrams of methamphetamine per day, per 1,000 residents.

Saarbrücken, near the border with France, was in the top spot in all of Europe for consumption of amphetamines. Berlin was the top German city for consumption of MDMA. Cocaine was more commonly found in Dortmund and Frankfurt. It was generally true that wastewater samples had higher quantities of these drug traces on the weekend than during the week.

Being centrally located in Europe, Germany has access to trafficking patterns coming from South America, the Middle East and adjacent European countries. From the Netherlands comes cannabis and MDMA. Cannabis resin (hashish) normally comes from Morocco. Amphetamines come from the Netherlands or the Czech Republic. Heroin starts out from Afghanistan, Pakistan or Iran and is smuggled into Germany from nearby European countries. By the time it arrives in Germany, its purity averages a weak 19% (weak when compared to American supplies).

Cocaine is sourced from South America and was previously trafficked through Western Africa and Spain. Recently, patterns seem to be shifting, with more cocaine being trafficked directly into Antwerp and from there to the rest of Europe. Antwerp is just a hop, skip and a jump from the German border.

What drugs drive Germans to rehab? Not surprisingly, cannabis is the top drug, with 39% of people entering rehab saying that this is the primary drug they are using. Heroin is in second place at 32% of rehab entrances—higher than many other European countries. Amphetamines send 17% of rehab entrants and cocaine sends 5%.

According to the EMCDDA, nearly 800,000 people received some kind of treatment for drug use in 2016. More than 78,000 of these people are addicted to opioids and are being treated with a substitute drug like methadone, buprenorphine or diacetylmorphine—another name for pharmaceutical heroin. It’s possible that those in treatment for opioids have the hardest time finding stable recovery. Of the 27,700 people admitted to treatment in a recent year, only 13% were entering rehab for the first time. The other 87% had been to rehab once, twice or many times before.

There are signs that these rehab numbers may be changing. In recent years, more people are looking for help for methamphetamine or amphetamine addiction and fewer for opioid addiction. In 2015, the EMCDDA reported that, for the first time, methamphetamine was the most common stimulant used by German adults. Only very small quantities of methamphetamine are seized compared to other drugs, but it is an intensely addictive drug.

Female Drug Use in Germany

In nearly every region of the world, for nearly every drug, the statistics among men using a particular drug are two to four times as high as for women. In Germany, this is not the case among young adult men and women. For MDMA (Ecstasy) and methamphetamine use, the rate of use is exactly the same.

Cocaine use rates are nearly the same for both genders.

There is a smaller-than-average difference between male and female cannabis users.

But women seek treatment far less often than men. (The following statistics refer to admissions of all age groups, whereas the statistics above only relate to young adults.)

In this chart showing treatment admissions of either gender, you can see that opioid admissions are declining slightly, while admissions for addiction to cannabis and stimulants—primarily amphetamine, methamphetamine and MDMA—increase.

A Lasting Solution Is Needed

No one of any nationality wants to be addicted. Everyone wants to break free from dependence on drugs or alcohol, no matter how much they resist offers of rehab or ask to be left alone. From the very first days of the Narconon drug rehabilitation program, this unique program has offered an effective path out of the darkness of drug use and addiction.

To break a person free takes addressing both the physical and mental chains of addiction. The first two steps of the Narconon program help release a person from the terrible prison of cravings. First, a well-supported withdrawal procedure enables a person to come off the drugs they were using without agonizing sickness and pain. Generous nutritional support eases the body’s reactions. One-on-one work and gentle procedures to calm both body and mind help each person begin to see that sobriety can really work for them.

When a person shows no more signs of withdrawal, they begin a deeper detoxification. Exercising moderately, spending time in a low-heat sauna and following a strict regimen of nutritional supplements enables the body to reach deep into the cells to draw out and wash away old drug toxins. As these stored toxins are flushed out, each person brightens up. Finally, the darkness and dimness so common to drug use begins to fall away.

A New Orientation and Life Skills

Now, each person needs to begin building a new life. This process starts with “Objectives”, a series of exercises exclusive to Narconon drug rehabs that gradually reconnect each person with their present environment. As the trauma of the past fades, to be replaced by a brighter present, each person gains greater analytical control over their actions, decisions and even their thoughts. Finally, they are taking back control of their own lives from drugs and alcohol.

Finally, each person completes a series of life skills courses that builds up their power to choose the right associates, maintain their integrity and rebuild relationships with their families, friends, employers and community.

This is a path to lasting sobriety, one that doesn’t have to rely on substitute medications. This is the path back to a productive, enjoyable life.

If you are looking for help for a loved one in Germany or any European country, please contact Narconon Europe, located in Copenhagen.

Even Far-Northern Norway is Subjected to Drug Trafficking and Addiction

Norway has taken dedicated action to overcome drug addiction problems but still, overdose death rates are high compared to the rest of Europe. With a holistic recovery program just hours away from the core of its drug use problem, many Norwegian families are finding another route to recovery and sobriety. 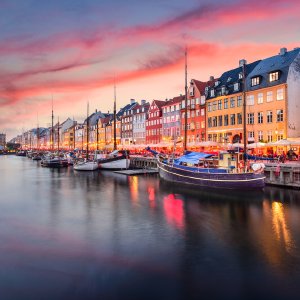